I love the weekend.  It’s time for relaxing and for thinking about how to relax.  It’s been awhile since I last watched a movie and it’s been an even longer while since I last sobbed watching a movie.  Watching a movie on DVD at home where there are not another hundred or so people next to you, you find yourself fulling immersing yourself and embracing the emotions that come with it.   You can cry and laugh as loud as you want.  You aren’t going to be disturbing the person next to you.  So yes I cried when watching “The Descendants”, but it was a good one.

“The Descendants” isn’t one of those action movies that keep you grabbing to the edge of your seat or hiding behind a pillow, when it gets all bloody.   It’s one of those movies where you watch a family, lives and emotions unfurl.  It’s harsh reality beautifully portrayed.

It’s about a family, a husband and two daughters and what happens after the mother is seriously injured in a boating accident.

You might think, so it’s another one of those movies when everyone sobs and gets through it.  Well there’s more.  A possible death of a loved one or family member brings up all kinds of emotions.  There’s anger, denial and most often regret.

In the first scene of the movie, the lawyer husband and land baron, sits by his wife who is laying in bed in a coma and hoping that she wakes up.  They had not spoken in days and months.  He wished he had lived his life differently and spent more time with his wife.  But life has passed by and he cannot bring her back.  Their marriage had quietly disintegrated despite a seemingly happy life with a large house and money for all their needs.

There is no one cause, but a mixture of reasons.   He was probably too focused on his work and his wife busy raising the children.   Matt King discovers he hardly knows his daughters.  He doesn’t know what they like, don’t like nor what kind of persons they have become.  He didn’t know his wife in the past ten years of their life together.  He had neglected her needs. He had been too self focused.  He lost touch with the personal and emotional aspect of his family.

It makes you think really.

What is it you want out of life?  What is important in your life?  Families like a tree require regular pruning and watering.  Once absent, they will wilt and die.   Relationships and emotions have to be handled with care and nurtured with love.  Only then will the tree blossom into a strong and beautiful one.   Think about what you really want.  Once you have it, focus and do not lose sight.

Life once lived cannot be taken back.

Don’t end up sitting by the bed of someone you love full of regrets about all you hadn’t done, thinking about all you should’ve done.   Live your life and do what you want to do, but don’t forget about those most important to you.   There’s more to life than just fame and money.

It’s no wonder this movie won an Oscar and several other awards.  It’s reality beautifully made.

I can hardly believe the year is almost over already.  In just a few days it will be December and along comes with it Christmas, parties and New Years…Today I write about a quote that has been stuck in my head for weeks and believe it or not, it comes from Kung Fu Panda 2. (I know it’s an animation, but I have to say I think the creators did a lovely job of not only graphics, but the plot and content is also quite thought provoking. )

“It does not matter what your past is, but what you will do with your future.”

Master Shifu said something like this (I don’t remember the exact wording) to Panda when teaching him about “inner peace.”  Despite Panda’s success as a Dragon warrior Master Shifu says one needs to achieve “Inner Peace.” Inner peace is essential for without it, in the face of danger one can lose one’s grounding and fall flat on one’s face.   Inner peace stablizes us and lets us stand ready for whatever happens next, whatever comes to us.

What’s important though is not to let the past hold us down.

Many people and myself included sometimes get caught in the past. This is the way things were, this is how they should be.  We get obsessed with our own pasts, other people’s past and go about getting all flustered about it. We think our past defines who we are.  We believe that we are a product of the past. We think that we cannot change.

However, we are not.  The past does not define who we are.

What is more important is what we make of our future and who we are today.

What is important is what you learn from your past, your experiences and the path you choose for your future.

A robber doesn’t forever have to be a robber. If he realizes this is not the way he wants to live life, he can reinvent himself and find another career that is more honest.  We give them second chances.  In other ways, we can also give ourselves a new life.  Just because a certain event or certain experiences made us feel down and sad, it does not mean that our life will forever have to be that way. It is what Master Shifu says, “What you will do with your future.”

Your future is in your hands. Make it what you want.

“All the world’s a stage,
And all the men and women merely players:
They have their exits and their entrances;
And one man in his time plays many parts,”

I think Shakespeare was really right to compare our world to being a stage and us merely players.  We are all born onto this earth as a child, we play our parts, grow up, and then we depart.  Sometimes it’s as if we are taking part in one giant movie.  Each life is a different movie.  Sometimes they interact, sometimes they each take their own path.   Upon each path, we encounter a series of characters, each one brings with it new experiences, new emotions.  Then paths diverge and evolve.  It’s a lifelong process that ends when we depart from this world and exit the stage.

I am suddenly reminded of the Truman Show.  A life we thought we had, was simply someone else’s show.

What happens when we exit the stage?  No one knows. It’s another story, another stage. Some believe in the afterlife, reincarnation.  Some believe there is a soul that remains and perhaps we go to heaven or to hell.  Some believe we are nothing more but dust and air once we perish.  It’s an answer no one alive can ever tell you.  To find out, we’d first have to exit this stage. Then, we wouldn’t be here discussing what happens. 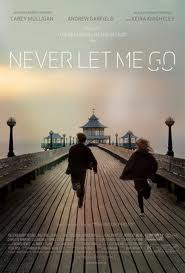 Sundays are usually days I have to relax and contemplate a little. This past Sunday I watched a movie called “Never Let Me Go” and it is indeed an emotionally touching movie. I had tears in my eyes as I watched it on my computer screen, I suppose if I were watching it on a big screen it would be even emotional. It’s a heartbreaking for it raises questions about the morality of cloning humans for organ donations.

I remember debating the morality of all this in highschool.  Afterall, this was during the era when Dolly the Sheep became the first success story of a clone from an adult cell.  This was a scientific breakthrough, but was this moral?  Was this the right thing to do? To what extent is technology to be used for one’s on good?

“Never Let Me Go” addresses this question by showing us kids growing up in a seemingly normal English boarding school.  The only difference was that they were clones.  They took lessons, played rugby, and had emotions just like everyone of us.  They felt anger, friendship and love.  Unlike us, though, they’ve been taught that once they graduate, once they reach adulthood, they are not to live normal lives but instead undergo a series of organ donations until they “complete.”

It’s sad. Here were humans facing up to life awaiting their time to donate organs.  Humans just like each and everyone of us.

In the end we are all humans no matter how we came into being.  In the end we all “complete” whether sooner or later.  Some “complete” their purpose in life to help us live longer, while in the end we too will “complete.” So how can one life be given priority over another? It cannot. A life is a life.

In the end, we never feel we have “enough” time on this earth.  There is always something we wished we had done, or something we wanted to get done or say.  There is no way to avoid “completion” for our time on earth is limited.   Just live and make the best of each day.

No clone can make you live forever.