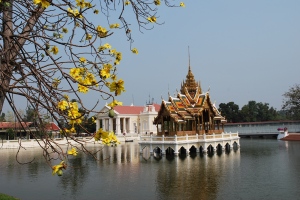 It’s a long weekend in Bangkok and what bliss it is to have a four day weekend. You do your errands, have family time, have time for friends and still you have time leftover for yourself. It’s a great opportunity to unwind, relax and slow down a little. It’s also a great time to travel. If you don’t want to go to the beach or to the mountains where a significant portion of Bangkok’s population has escaped to, you could choose to opt for a day trip to Bang Pa-In Palace near the ancient capital of Ayutthaya.

If you have visitors from out of town, this is a great place to take them without having to drive too far. The palace is only roughly forty-five minutes by car so you don’t feel too exhausted by the time you get there.

Bang Pa-In is also known as the summer palace and has a history dating back to the 17th century when King Prasart Thong first had the palace constructed. The most beautiful building in the compound is the Thai-style pavillion called “The Aisawan-dhipaya-asana” which was said to have been constructed in 1632 the year his son, and future King Narai, was born. It is definitely a site not to be missed. It is unlike other pavillions I’ve seen for it stands in the middle of a large pond which enhances its beauty by ensuring that nothing blocks its view. In the sunlight, its gold and tiled roof of orange, yellow and green reflect off the still water. It’s elegant. The soft downward sloping roof is lifted up towards the sky by decorations that represent the naga and the garuda.

Although the Thai pavillion is indeed beautiful, a lot of Bang Pa-In’s beauty also comes from its main other buildings which were built by King Rama IV and King Rama V. After discovering the palace abandoned and overgrown, the palace was revived and expanded to include shrines, an assembly hall for royal relatives which is a colonial style building, an observatory tower, a chinese style two storey mansion as well as other buildings or residences.

It’s a mixture of east and west. You can tell this was a time when Thailand had exposure to the best of both worlds. Czar Nicholas II of Russia was even said to have praised the summer palace for its building which was “furnished luxuriously and with refined taste and comfort” during is visit in 1890. I can imagine so. Each building is connected by the pond and if you close your eyes, add a few rowboats then you could very well be in a European summer palace. It reminds me of Poland’s summer palace and the moves of ladies and gentlemen out having a good time. Now imagine it in Thailand. I wonder if it was as hot back then as it it nowadays.

The Chinese pavillion was built by today’s equivalent of the Chinese Chamber of Commerce and I have to say it is just as beautiful as the ones I saw in Beijing. The tiled floors, the ebony furniture and all the decorations are intact. There are a number of fine porcelein as well as gold and silver decorations. There was an intricate ivory bone carving that just takes your breath away. All intact and unspoiled. Even at the forbidden palace years ago I did not see such fine furniture in its orignal layout. This was a gift from China. A country that is once again a force to be reckoned with.

I like water, I like gardens and I like anything romantic. This place is romantic and a great place to go relax enjoy the view. My only advice is be prepared for the heat or come during the winter months. There are not many trees at Bang Pa-in and with Thailand’s sorching sun, you might altogether decide that no matter how beautiful it is, you’d rather go back to somewhere airconditioned. You could also rent the electric cart which will help but its really not that much of a walk. 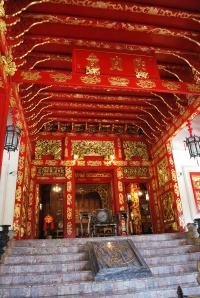 If you are a fan of sending postcards (like I am) just across the street is a post office where you can mail your postcards or letters.. Sadly they don’t sell stamps together with the postcard at the souvenir shop so you will just have to hop over yourself. 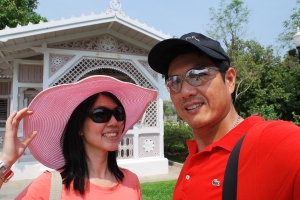