Yesterday, I went to the Red Cross Fair for the first time. My office is located not far from where the fair is held, and after more than a decade of being stuck in its traffic and wondering why they have to close down roads for it, I finally decided to actually go in and see for myself what they have inside. In previous years I had contributed to the fair by donating my clothing and other goods to sell, as well as buying raffle tickets, but I had not ventured into the actual fair. The hordes of people always seemed so overwhelming to me. It still does.

The Red Cross fair is one gargantuan affair in Bangkok. Temporary stalls are built along the roads surrounding the Parliament building and spread all over the gardens that surround it. Stalls from all public sector offices ranging from the post office to the local district office have things for sale and other goodies for which to try one’s luck. The army, navy, and airforce are all there in full force. Living models of soldiers in full clad uniforms stand guard booth entrances and those interested can go in to try their skills at firing guns. Uniforms, keyrings and other goodies are all on sale. Then there are local companies with countless goodies on sales. Everything there is supposedly cheaper than those sold elsewhere and bargain hunters go crazy sorting through the goods. 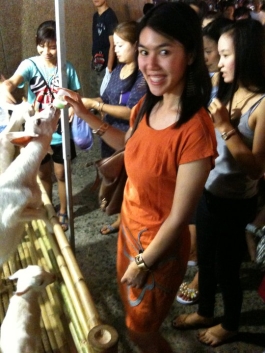 One thing that stands out though is the number of people who turn up to the fair. People were everywhere buzzing around, goods in hands amid the unbelievably high level of noise pollution. Everyone was fighting for everyone’s attention and at times I felt like I needed to have four heads to take it all in. To my right would be a stall promoting local products, to my left one telling me that I can go play games inside, behind me would be a stage full of dancers and a singer, to my front would be a bear garden.

My favorite part though was the area surrounding the pond and the gardens. There, were some areas of peace and calmness admist the hectic bustle of red cross shopping. I particularly liked a stretch of garden where roughly 20 artists lined it’s path awaiting anyone who wanted to have their portraits drawn. Young children to older adults sat there patiently as the artist watched and drew. It reminded me of the Montmarte in Paris. I wonder what is going through the artists’ mind and in those sitting on the chairs as people walk by. Amidst all this chaos, is a quiet area where art and people unite, where brains can reflect and inspirations created.

There was something for everyone at the fair. Even goats for you to feed.

It was one crazy evening I have to say. If you don’t mind the people then you should go to the fair just to see what it’s like. It’s one giant party. Food stalls can be found everywhere, and if you get tired, there are foot massages for a mere 150thb. Everything is on sale for the Red Cross. Mind you though , at times you’d find yourself being pushed for there is no place for you to walk and lound speakers blast into your ears every now and then.

I have to say for me it’s a good experience and one that I’m happy to have had. I understand now why it has to be outdoors. The atmosphere just isn’t the same and all this could not possibly fit into any convention hall. How could you have several shooting ranges set up, stages for dancers, food stalls and shopping all under one roof? And all this for 9 days and 9 nights. I suppose I’d just have to put up with its traffic for a while longer as this is all for a good cause.

Despite the interesting mix of activities for everyone, I probably won’t be going again for a couple years. I get a little dizzy with all the people and noise….but that’s just me. :):) 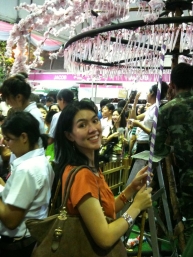