My virtual trip to Vienna is starting, and I have to admit that I too am excited about it.  It makes my heart beat faster and my face smile.  Like every trip, its the anticipation that gives us the most joy.  The first area one must visit while in Austria is definitely the old town.  Most of the action happens here and almost everything worth noting is around the this district number 1 (Vienna has 23 districts).  The old town is the centre of Vienna and everything else revolves around it.  I spent a good few months wandering around the area, taking buses, trams and doing a walking tour of the place.  Only by foot can you really learn about a city.  Learn its streets and see its culture.

My recommendation for everyone’s first visit is to head towards the Ringstrasse before walking through the Old Town.  It gives you an idea and orients you about the city.  What is it?  The Ringstrasse is a circular boulevard that encircles old town Vienna.  This was where the fortress walls protecting Vienna had previously stood in ancient days.  It took Emperor Franz Josef’s vision to demolish the defences and convert it into a grand boulevard.  It’s a grand boulevard just as grand as the Champs Elyssee but what I love is that on this boulevard are all the main cultural and political institutions. 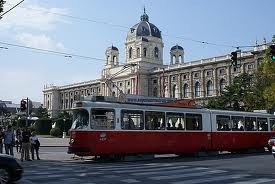 Now to walk the entire boulevard would be tiring. You would be encircling the entire old town and its not that small, so my tip is to hop on the tram.  There are two trams that go around the Ringstrasse.  Trams 1 and Trams 2.  One goes clockwise, the other anti-clockwise.  I can never remember which does which, but if you just hop on one, you’d see all the main sites. It’s worth it. Just don’t go on rushhour in summer. It can get packed and sweaty.

What is there to see?  Oh its full of architectural feasts for the eyes.  Emperor Franz Josef hired architects from all over Europe to beautify the boulevard and that they did.    The Neues Rathaus or New Town Hall is the seat of Vienna City and is interesting in a Neo-Gothic style built by Friedrich von Schmidt.  Since then, they had design competitions and he won.  It’s impressive and has a huge tower that brings your eyes up towards the sky.  I remember seeing it in winter when every year they’d put in place a large outdoor ice-skating rink just in front of the building decorated with Christmas trees and angels that lit up at night. This was where they had the Christmas market.  What a beautiful backdrop for ice-skating isn’t it?  I told you Vienna was romantic. 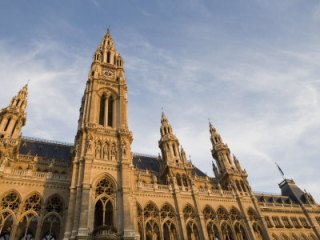 Just a hop away, you suddenly see another spectacular building built in a completely different architectural style. It’s the Parliament building in a Neo-classical style that reminds me of Athens and Rome.  Greek marble figures of Greek and Roman historians adorn the front. A fountain with the goddess of wisdom stands out front.

The next site is one that you could hop off and spend an entire day roaming around.  Its the Kunshistorisches Museum (Museum of Art) and the Natural History Museum.  There is so much there they can occupy a post of its own.  Perhaps on a rainy day or after you’ve walked around the Old Town Square, its a perfect place to see the collections of the Habsburg monarchs.  Now, with the building of these museums, the private treasures of the Habsburg were made available for all to see.  I saw treasures that were later stolen.  Invaluable treasures. 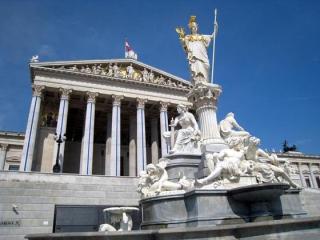 The arts arrive after all the politics and the treasures.  There’s the famous Opera House, the Burgtheatre, and the Stadtpark with the famous golden statue of Johann Strauss with his Violin.   You can see the list is long so I won’t delve into details.

Not only do you pass by impressive buildings, you also pass by hotels and cafes and a little bit of local life. On the northeastern side of the ring, you catch a glimpse of where the locals live and the Danube canal built to stop the city from flooding.  Urban planning in Vienna is exemplary.  Everything is planned and integrated.  What else can I say… Just going around the Ringstrasse can take your breath away.  Wait till you see the inner square of the Old Town and see the treasures that lie inside the Treasury.  Imperial Vienna was a rich city.