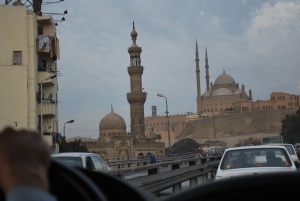 The Clock from France

Under the Dome, the Ornate Interior

Before we enter the land of the ancient egyptians, we visit the Citadel which was home to Egypt’s rulers for almost 700 years beginning in 1176.   I must say it’s definitely one of the largest Citadels  I’ve ever been to.  It’s so big, it’s like a little city all within itself with mosques, gardens, houses, and other buildings.  Up high on the hill, it rises above Islamic Islam as a reminder of ancient power and glory.  So great was it’s empire back then.

The main destination is most definitely the Mohammad Ali Mosque.  When I first hear its name, a grin flashes my face as it reminds me of the boxer, but then I remember that Mohammad Ali was the name of the founder of modern Egypt.  He had brough Egypt recognition after being part of the Ottoman empire.   It’s an enormous mosque.  There is a large central dome and several other small ones. Two minarets rise out into the sky.

By the entrance, I am shown a beautiful clock that towers above the courtyard.  I’m told it was a gift from King Louis Philippe of France who sent this clock in exchange for the obelisk at the Place de la Concorde in Paris.  I must say the French have a great deal and know how to negotiate.  They have a beautiful obelisk  beautifying their city whilst the Egyptians have a clock which has been dead for centuries.  It was damaged since its delivery and until this day the Egyptians are still patiently awaiting for the engineer sent from France.  I wonder if he’ll ever arrive.

The mosque’s interior is grand and cool to the skin being built of marble.  I look up into the ceiling, but my eyes do not see the beautiful painted gold decorations.  I use my camera and it magically captures what the eyes do not see.  The effect is astounding.  A warm green covered in golden stars cover the domes above.  Some muslims chant some prayers and the sounds echo throughout the mosque. It’s quite magical.

I decide to walk outside and am immediately at awe with the vast skyline in front of me.  I am towering above Cairo and below me I see the ancient mosques, the ancient aqueducts.  I see the brick houses and out into the horizon I see glimpses of the Pyramids of Giza.  Their size is unimaginably large.  I can see it from the Citadel.

It’s a bit cloudy and windy but as I stand there looking out at the Great Pyramids, the clouds suddenly part and rays of sunshine beam onto the pyramids out at the distance.  I’m enthralled.  Nature is amazing. It’s no wonder ancient egyptians worshipped the sun.

Before I leave, I visit this little Mosque of Suleiman Pasha.  It’s a bit far and on the otherside of the Citadel, but I must say I like this mosque more than the vastness of Mohammad Ali’s Mosque.  It’s small, cozy and “feminine” if I may call it so.  It’s apparently an Ottoman mosque built in 1528 and it is so intricately decorated I love it.  Inspired by Turkish designs, beautiful coloured tiles cover the mosque.  Beautifully inlaid marblework make the Mihrab (prayer niche) and Minbar (pulpit) glow out into the hall.  In the adjoining courtyard, I find peace amidst the stone archs.

There is something about large stone structures that just appeal to me.  I take a deep breath, look around me and say my farewell.   I’m glad we came out to this little mosque far away from the tourist crowds.  I feel like its my little discovery even though it has been discovered many times before me.