At the Gayer Anderson Museum

A little over a decade since I first started planning my trip to Egypt, I finally made it.  I was at long last in the land of the great pyramids, where great pharaohs had ruled Egypt for thousands of years.  I was finally in the land of the mummies and hieroglyphics.  A land where mysteries abound.  Of course my first destination was Cairo: the capital of Egypt.

I landed at Cairo Airport and was instantly struck at the amount of people everywhere.  It’s a small airport, so once off the airplane you just walk into the terminal building, watch your plane roll by and see a dozen tour groups waiting to go through immigration.  It was crazy.  Though busy and crowded with people like Japan, it was busy in a totally different sense.  Crowds of people stood around in anything but a line.  Tour leaders with dozens of passports in hand would somehow get to that window without havng to wait and then ‘poof’ his people would be through.  I realized, you had to be street smart to get around Egypt.  Following rules was not a prerequisite. Oh, and men need to have moustaches.  Moustaches were everywhere.

Now Cairo is a big city with a rich history and past so amazing that I wonder where to start.  There is Islamic Cairo whose landscape is filled with minarets, domes and the famous Khan-al Khalili Bazaar.  There is Old Cairo which has a Roman and Christian past, and then there’s Central Cairo which is the heart of the modern city and boasts features of European architecture modeled after France.  Cairo is a fascinating collection of architecture. 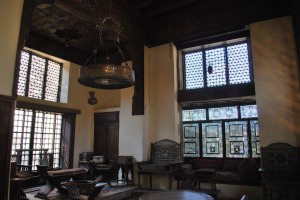 I’ll start today with one of my favorite sites in Cairo.  It’s a museum that is often not included in the program guide, but one definitely worth going to if you have time: The Gayer-Anderson Museum.

The museum is in actual fact two adjacent 16th and 17th century houses that were lovingly restored by Gayer Anderson Pasha who was a Major serving in the British army and had received special permission to reside in this house by the Egyptian government.  He must have been one influential officer for his house stood with adjoining walls to one of Egypt’s largest and oldest mosque: Ibn Tulun.

It’s a magical house and one that can make you believe in flying carpets and Aladdin.   Inside, the house was decorated with wooden mashrabiyya screens and other beautiful objects of 17th century life.  The tables, chairs, screens, carpets, and lamps all made you feel like you had entered a truly Egyptian house.  The best of Egypt had been assembled here for all to see from the intricate marquetry wooden boxes with inlaid mother of pearl to copper tables that made me want to just dine there.

Going up stairs, through rooms you would get lost if it wasn’t for the occasional help of the guide in the house.  He showed us this fascinating corner cupboard that looked liked an innocent corner cupboard.  That was until he pressed a magic button and opened up a secret hiding place behind it.  It was an area small enough to fit in perhaps two people and it looked out onto the large reception hall below.  Clearly covered by the mashrabiyya screen, the minutely interlaced wood allowed females looking out to be veiled from the gaze of men. Though not seen, they were free to observe all that happened downstairs.

I’m told this cupboard is also where James Bond’s Movie “The Spy Who Loved Me” was partly filmed.

Moving up onto the rooftop, I’m greeted by a corridor of these beautiful wooden mashrabiyya screens which mesmerize me.   The designs are so intricate and so beautiful against the clear blue sky I crave to own a screen of my own.  The little windows built into the screen each open up to the top of another mosque in the horizon.  It was all calculated and planned.  Beautiful.

I wish I could stay and spend a night in this wonderful house, but it is only a wish I can dream of.  An hour after arrival, I am ushered out of the house before the important Friday midday call to prayer.  The staff are to close down the museum temporarily. Next time I’ll have to time my visit better.

View all posts by HavingMeTime