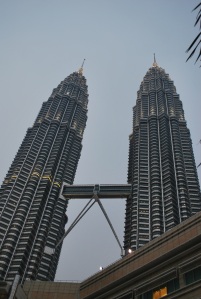 Okay, I’ve been back four days and I’m still writing about Kuala Lumpur. There is just so much to write about! When you think of sight seeing in Kuala Lumpur, the first site that most often pops into anyone’s mind is the “Petronas (Twin) Towers.” (In case you’re wondering, Petronas is the large Malaysian oil conglomerate and it occupies one of the towers)

For six years between 1998-2004 the 88 storey high Petronas Towers claimed the title of being the world’s tallest building until it was surpassed by Taipei 101. Now, it still holds the title as the world’s tallest Twin Towers. I’ve seen many pictures of it and what always came to mind was, “ok, its a tall building, what next?”

I didn’t really expect much, but I have to say that I was surprised at how beautiful it is when I actually saw the building. Walking around the building and looking upwards, I felt how impressive it was and the steel straps that ran around the buildings between each floor made the buildings gleam and shine out from amongst its peers. Islamic motifs were designed into this structure of reinforced concrete and steel, reflecting the prevalence of Islam in Malaysia. At night, the rays of light that shone on the buildings assured that they were visible for all to see.

Of course, such a sight necessitates going up. A limited number of visitors are allowed to go up each day to visit the skybridge which stands between the two buildings on the 41st and 42nd floor, 170m (558ft) above ground and 58 m (190ft) long. It’s way up there and not for those who are scared of height.

Everyone is brought up to the skybridge via a high speed elevator that travels for only 41 seconds. Amazing. I felt like I just walked in and before I knew it, it was time to walk out.

On the skybridge you get a panorama view of the city. It’s absolutely breath-taking especially on a clear sunny day when the sky is blue and you can see out far into the horizon. On one side was the business district of Kuala Lumpur and the other side, the residential area. A beautiful park below with lakes and fountains flowed out from the twin towers, providing a place for all to relax and unwind.

An aspect that I really loved was the vision and planning that you could see had been done. At the base of the towers was the home of the Malaysian Philharmonica Orchestra and a large up-scale shopping mall called Suria-KLCC. You could walk between the base easily and even go for a walk in the adjoining park. Lanes were built for cars to pass by and drop of those wishing to enter the building.

Everything had been thought through.

Its definitely a site to see even if it’s “a tall building.” Just think of it as a tall building with style. Imagine, the french climber Alain Robert was crazy enough to climb to the top of it with his bare hands and feet! Crazy huh?