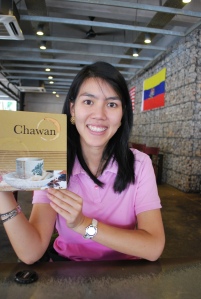 What is a holiday if you don’t get to enjoy eating a little?  Learning about any culture requires one to also try their local specialities and my good friend made sure I got to try all the good Malaysian food!  I was constantly fed more than I should have delicious Malaysian food and snacks.  I must say  I really do like Malaysia food and their curries.  It’s not too spicy and it always involves coconut and chilli.  Not wonderful for your waistline, but too irrestible to forgo.

I decided to just eat and then come back home to run it off 🙂  Afterall, one’s got to enjoy eating!  Why run if you can’t enjoy a little treat now and then?

My friend ordered three dishes which I absolutely love and could not stop eating.  I like carbohydrates and anything that is roti (or pancake) like.  When I saw the laced roti served with chicken curry (Roti Jala with Chicken Curry) I just had to have it.  The great thing about the laced curry is that it feels lighter than most rotis and the texture just melts in your mouth when served with curry.

Another dish we had was called “Keropok Lekor with Kuah Lada” which was fried rolled fish cakes.  It’s served with a sauce that gives the rolls a nice tang to it.  It’s a great snack to have if you love something abit more substantial but not too heavy.

The final dish we had was the lightest one.  It was a dish of steamed banans served with coconut flakes and chilli called “Pisang Abu or Pisang Nangka Kukus”  Pisang means “bananas” and kukus means “coconut.”  I’ve never had bananas served this way and thought it’s was a great way to have them.  It’s much healthier than frying the bananas and it has some added taste with the coconut flakes and chilli.

Now the Malaysian chilli is something I really couldn’t get enough of too. It’s not too spicy and it can be added to almost anything.  My friend tells me its made of blended chilli with garlic and then fried in oil.   I could just have a spoonful of it. 🙂

When I next go to the bookstore, I’m going to have to get myself a Malaysian cookbook and try out some of the dishes.  I really don’t know of many Malaysian restaurants.  I used to eat at “Penang” in Philadelphia and New York, but that’s just about it.

So if you ever go to KL and want some local Malaysian food, I recommend “Chawan” which apparently means “cup” 🙂  Oh, and the price is very reasonable too! Enjoy! 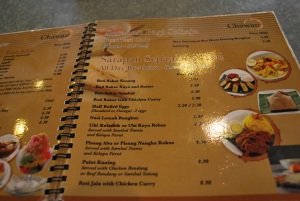